Ok. So I’ll admit; I haven’t see most of the James Bond movies. I have however seen all of them from my generation. I thought the Pierce Brosnen movies were just decent, but for the most part I’ve loved the Daniel Craig ones. Quantum of Solace could have been better, I guess. With such a huge barrage of movies spanning such a long period of time, one would expect the well to run dry on this property. Some of my favorite movies defy expectations and Spectre is no exception.

The Story here isn’t anything mind-blowing for the most part, but it serves as a great vehicle to put 007 back to work. Specter is the newest set of grave circumstances that Bond must overcome to keep us all entertained and save the world. Here there’s basically a new fangled intelligence agency trying to squeeze MI6 out of the mix while James Bond has gone rogue. He’s trying to solve some mystery that we find out is related to the company trying to oust MI6. James has to stop them.

My main gripe with this movie was the way they tried to tie this one to the previous three. In these days of cinematic universes tying numerous films together, the way they did this just wasn’t good enough. It was obvious that this wasn’t something they had been planning since Casino Royale. Had they, it really would have payed off, but here it really felt shoehorned-in and under-explained. Everything with Mr. White payed off, but that was because he had been in a few of the movies before.

007 was everything he should be in Spectre. He got the ladies and did his spy thing. He kept a cool head and stayed so suave the whole time. Daniel Craig is the definitive Jame Bond for me. While he didn’t do anything particularly spectacular in his performance, he didn’t need to. He has the role down pat and I don’t need anything more from the character.

Christly Waltz has been a great asset to any of the films he’s been in over the years. Specter is no exception. Here he plays the iconic Bond character of Blofeld complete with subtle nods to all the memorable elements of the character that have been spoofed over the years like the cat, the lapelleless jacket and more If anything would have like to see more of the character.

I also enjoyed the rest of the players in the story like Moneypenny, M and the love interest Dr. Madelyn Swann. Q also really got his time to shine here. Some of my favorite moments of Spectre were Bond and Q’s interactions. I hope they bring back Craig, Waltz and this whole crew for the next outing.

As expected the action in this movie is spectacular. There’s fights on helicopters, plenty of epic explosions, the obligatory car chase scenes, numerous gun fights. All as gorgeous as I could have hoped for. All the stuff with David Batista’s mute character was great. He’ll go down as one of the more imposing and memorable Bond henchmen villains in the vain of Jaws in The Spy Who Loved Me. There’s a fight sequence that takes place in a train that harkens back to the one between Bond and Jaws in just that movie. This one however is much more intense and brutal while lasting a bit longer.

There’s been a good handful of spy movies this year but James Bond just showed us all why he was the king of the genre. Specter has everything we’ve come to expect from a great 007 movie; great action, beautiful women, memorable villains wrapped in a serviceable storyline. While not quite the film Casino Royale or Skyfall were, Spectre is another fantastic entry to the series.

Derrick Powers is a connoisseur of superhero cinema, the owner of Heroic Review and an all-around great guy in general. More articles by Derrick Powers.
Newest Posts >> 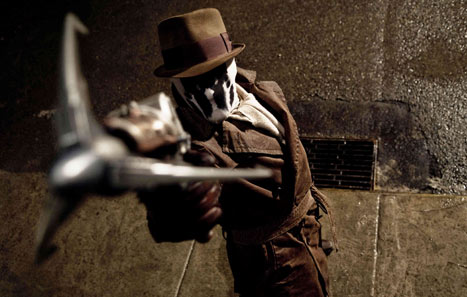